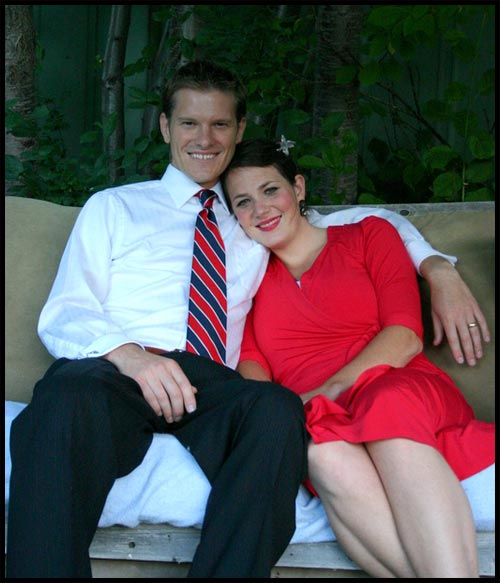 As Andrew and I ascended the Nielson's porch for the first time, he was just concluding a long tribute to Mr. Nielson’s prodigious achievements.  “Christian graduated from high school with a commercial trucker’s license, earned fame as a rodeo star, successfully modeled, gradated at the top of his class in facilities management, and released an album (Twyce Around) which sold successfully to the delight of screaming girls who faithfully followed the band’s performances.”  But as my heel crossed the threshold, I saw a man’s true accomplishments:  an eternal marriage to the girl of his dreams and a growing family of cherubic children.  I left thinking, “that is a family.”

Christian is more than a man; he is a priesthood leader.  His hands have framed houses, handled snakes, flown planes.  But his hands have exhibited far more strength and power than this.  Christian’s hands have held Stephanie’s, kneeling across the alter as he promised himself to her for time and all eternity.  His hands have held his children as they took their first breaths following his gentle coaching through home births.  His hands have been laid on the heads of his daughters and sons as he gave them names and generously blessed them in preparation for the life ahead of them. Because Christian lead with gentleness and love unfeigned, his hands hold God’s power.

Christian and Stephanie have been through a literal refiner’s fire.  “The insignificant and the unimportant in [thier] lives [has melted] away like dross and [made their] faith bright, intact, and strong . . . the divine image [will] be mirrored from [their] soul[s]. It is part of the purging toll exacted of some to become acquainted with God1.”

Like Shadrach, Meshach, and Abed-nego’s story in Daniel, we are expecting God to perform miracles in the Nielson’s behalf.  He created their bodies, and it is no more difficult for Him to heal their wounds than it is for Him to heal a blister.  With these ancient missionaries, we repeat, “Our God whom we serve is able to deliver [them] from the burning fiery furnace.”  He can deliver them from the mortal consequences of disability, mutilating scars, and mental anguish, if it be His will.  “But if not, be it known,” our faith will not be shaken.  Even if the flames of this life exceed seven times seven their normal amount, Christian and Stephanie have not been forgotten.  They are in the palm of His hand, where they are engraven for all eternity.  And as Christian endures, he will one day stand before Christ in the morning of the first resurrection perfect and glorious.  And he will call Stephanie forth, and she will join you in radiance without flaw.

I ask that you pray with me that Christian will be strengthened to carry the burdens placed upon him.  Pray that he will be given power to lead his family through the flames of this trial. As he submits himself to God’s will with the patience and humility of a child, his and Stephanie’s brilliance and beauty will be a beacon, shining for the benefit of all God’s children.  We are grateful for this couple's willingness to endure this cross that all our faith may be strengthened.  We are grateful that by their Christ-like examples we may know Him better.  Please continue to keep this family's welfare in your hearts.