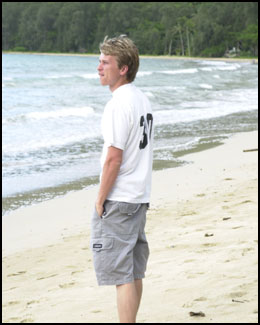 June 2005: Andrew sojourned in Hawaii for two weeks on the company bill while photographing a ProPix soccer tournament. Andrew's Mom displayed this picture on the mantel. She would look at it with sad eyes and say, "Doesn't Andrew look lonely? He needs a wife to keep him out of trouble." When Andrew called and told his Mom he had met his future wife after their first meeting in August, Mom said, "Get married by Christmas so the family won't have to buy another flight down for the wedding." Like a good son, he complied.