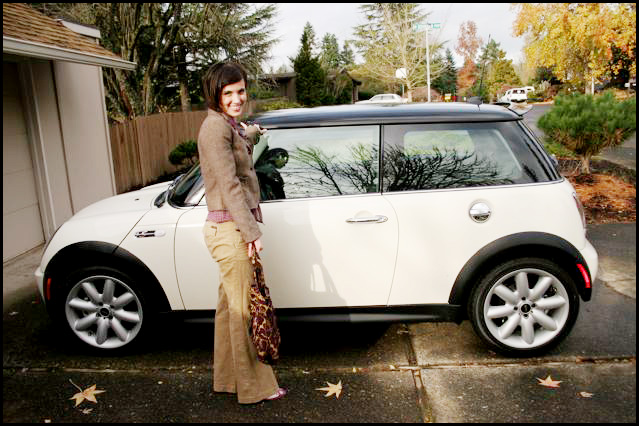 Nov 2006 - Reachel and Andrew began car shopping when they moved to Arizona in December of 2004, a mere 27 months later they purchased a new car. There were several casual trips to the Park and Sell, at least 6 visits and 3 test drives at the Honda dealership - seriously courting a 2006 Galaxy Gray Honda Civic EX, an intense flirtation with a 2002 Mercedes C320 wagon, but a flippant test drive led them to absolute fidelity and commitment with a Mini Cooper. They patiently waited for 3 months while it was built in England, shipped across the pond, and finally arrived tax free in the beautiful state of Oregon. At Thanksgiving with family in Portland, Reachel and Andrew rejoiced in their new transportation.

…lucky thing the Mini came when it did, about a week later someone t-boned Reachel in the Honda Accord seriously damaging the front and rear door on the passenger side and disabiling the alarm. Happily no injuries were sustained, but the offending driver was uninsured :( Approximately 10 days later, a burgler dashed the passenger-side front window and destroyed the dash while thieving the car stereo. Poor Honda Accord, a sad demise for a car that served so well.

Reachel and Andrew are now thoroughly committed to being a one car, one scooter family. Reachel is convinced that duo car ownership bodes only ill fates for them.