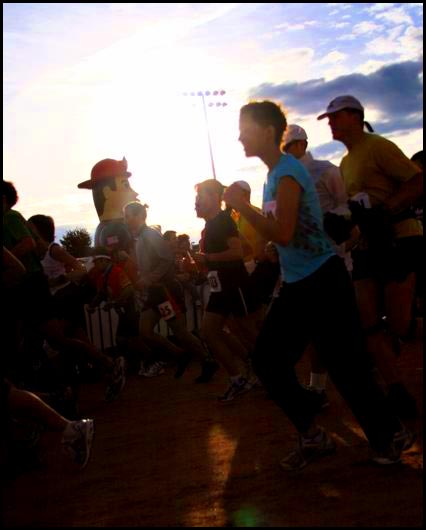 After 18 months of training, Reachel finally identified a nearby "non-Sabbath" marathon, and successfully completed her first 26.2 consecutive miles. The pedial travel-log follows:

Miles 1-5: A little nervous as dozens of people sprint ahead, Reachel contents herself with passing pine trees and water stations. She regains her confidence upon realizing she's being surpassed by 5K'ers and half marathon'ers who don't have to pace for the full distance.

Miles 6-10: Her rhythm stabilizes against the smooth dark pavement and vibrant variegated red rocks. Reachel's mighty hamstrings strongly climb the swelling hills. The first league of half-marathoners loops back for their second half applauded by the cheering din of their running comrades.

Mile 11-15: Training has consistently proven the half-way point as Reachel’s endorphin release. Knowing her strength will be peaking, she passes several runners to complete 13.5 miles in about 2 hours. Without the company of her iPod, she entertains herself by eavesdropping on contenders’ conversations. Her company comes from across the US and even across seas. 5, 50, 500, they account for previous marathons and compare it with the current altitude (high), difficulty (hard), and beauty (magnificent). Around this point, the pavement gives way to a red dirt, pebble strewn trail.

Miles 16-20: Trying a gelatinous power shot for the first time after turning the half-way point was less than delectable. Wishing she had stuck with a banana, Reachel concentrates on contracting her abs, straightening her back, and letting her legs float in true chi running style. As the running gets tougher, the runners get friendlier. Advice dispenses loosely on how to conserve energy, protect joints, and stay hydrated.

Miles 21-26: The trail ends and Reachel’s red stained shoes once again hit the pavement. But this time her hamstrings and quads are not so strong. She can’t really tell, but it feels different than mere exhaustion. With a developing 48 hour flu, she persists across unending hills which threaten to remove the nails from a foot’s worth of toes.

The last .2 +: Reachel sees the finish line and sprints across at 4 hours 54 minutes 36 seconds, placing in her age group's top ten. Poor Andrew misses her triumphant end mistakenly thinking that the start and finish were in the same place. Quickly returning to her side, He escorts her to the race headquarters for a deep tissue massage and energy work, where angels come to help remove physically manifested stress and guilt. Well...at least she got some flower infused oil out of it.

Next up the flat down hill St. George (Nov 2007)! Check out her favorite runs and map out your own at www.favoriterun.com.