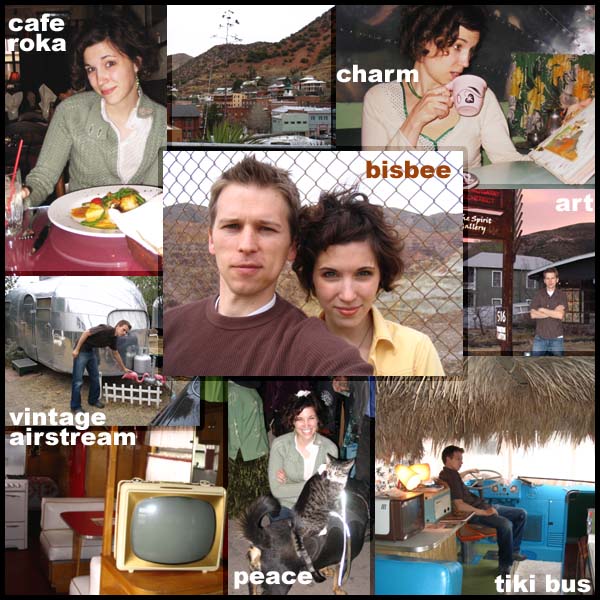 April 2006: For my Birthday Reachel surprised me with a mystery vacation. I didn't
know where we were going until we got there. South East Arizona, 20
miles past Tombstone near the border of Mexico and New Mexico you'll
find an old mining town called Bisbee. Until the great depression it
was the biggest city between Mississippi and San Francisco. It's a
tightly packed town with tall buildings, narrow winding roads and
alleyways reminiscent of Europe. The entire city is a historic
district with most of its buildings dating back to the turn of the
century. The city almost became a ghost town in the 70's due lay offs
at the mines, but was saved by the hippies. Now the city is romantic
get away/ art community. Lots of art galleries, antique stores, and
diners. To make the experience complete Reachel reserved
accommodations at the famous Shady Dell (www.theshadydell.com)
(featured in Budget Living and Bride Magazine). It's a trailer park of
nostalgic 1950's airstream trailers. All of them are original or
faithfully restored. They include record players, B&W TV's, antique
dishes, and decorations. (We think Ashley should go on a senior trip
here). Every drawer you open had a nostalgic surprise: vintage photo
albums, yellowed stationary, antique coasters. There's even an
original 1957 Diner Trailer onsite. We had a great time and plan to
return to Bisbee and the Shady Dell often.

The first night, we arrived to the crooning sound of Frank Sinatra's
Love & Marriage being played on a vintage record player in the famous
Honey Mooners Airstream. Night 2 we spent on the Tiki Bus and watched
"Bringing Up Baby" with Katherine Hepburn and Carey Grant on a 12 inch
Black and White Television.

I couldn't think of a better place to dine out. Every meal we ate was
fantastic and surprisingly inexpensive. We even had enough money left
over to attend the locally produced "Bisbee Ore Bust" musical comedy.

Notice the Picture of Reachel with a mouse on her head, more amazing is
the mouse on top of the cat on top of the dog. I asked the Hippie how
he trained them to do this and he said "animals are easy, people are
the ones that have a hard time getting along." Sage wisdom from a man
that hadn't showered since the turn of the century.